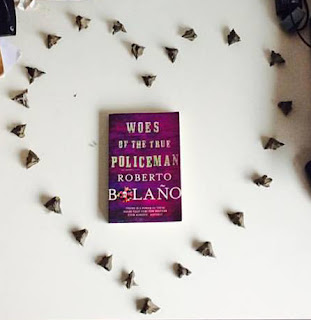 ""According to Padilla, remembered Amalfitano, all literature can be classified as heterosexual, homosexual, or bisexual. Novels, in general, were heterosexual. Poetry, on the other hand, was completely homosexual. Within the vast ocean of poetry he identified various currents: faggots, queers, sissies, freaks, butches, fairies, nymphs, and philenes. But the two major currents were faggots and queers. Walt Whitman, for example, was a faggot poet. Pablo Neruda, a queer. William Blake was definitely a faggot. Octavio Paz was a queer. Borges was a philene, or in other words he might be a faggot one minute and simply asexual the next. Ruben Dario was a freak, in fact, the queen freak, the prototypical freak (in Spanish, of course; in the wilder world the reigning freak is still Verlaine the Generous)."

"Anyway, the poetry scene was essentially an (underground) battle, the result of the struggle between faggot poets and queer poets to seize control of the word. Sissies, according to Padilla, were faggot poets by birth, who, out of weakness or for comfort's sake, lived within and accepted - most of the time - the aesthetic and personal parameters of the queers. In Spain, France and Italy, queer poets have always been legion, he said, although a superficial reader might never guess. What happens is that a faggot poet like Leopardi, for example, somehow reconstrues queers like Ungaretti, Montale, and Quasimodo, the trio of death. In the same way, Pasolini redraws contemporary Italian queerdom. Take the case of poor Sanguinetti (I won't pick on Pavese, who was a sad freak, the only one of its kind). Not to mention France, great country of devouring mouths, where one hundred faggot poets, from Villon to Sophie Podolski, have nurture, still nurture, and will nurture with the blood of their tits ten thousand queer poets with their entourage of philenes, nymphs, butches, and sissies, lofty editors of literary magazines, great translators, petty bureaucrats, and grand diplomats of the Kingdom of Letters. And the less said the better about the faggotry of the Russian Revolution, which, if we're to be honest, gave us just one faggot poet, a single one. Who? you may ask. Mayakovski? No. Esenin? No. Pasternak? Blok? Mandelstam? Akhmatova? Hardly. There was just one, and I won't keep you in suspense. He was the real thing, a steppes-and-snow faggot, a faggot through and through: Khlebnikov."
Публикувано от ivandimitrofff