IS THAT ALL? Is that all you have to say about Zhana, he screams to himself. You’re talking about the best month-and-a-half of your life and the only thing you can come up with is that? What’s the matter with you, you stupid bastard? You’re not trying to tell me that your most beautiful memories are foggy, while you remember the bad ones down to the last detail? No, that can’t be true. Everything must have left a mark. Zhana is in there somewhere. The only way to get her back is to talk about her. So talk! Talk! Talk, you stupid fucker! Talk, you fucking zombie! Talk, asshole!
Talk about the mornings, when she was the first thing you saw, and how while she was still asleep, you would study the small mounds of her breasts as they slowly kept time, and her closed eyelids, her eyeballs spinning under them, trying to catch a glimpse of you. Talk about her eyes opening and the fluffy, feline stretching of her arms. About the happy crunching of toast with peanut butter, which you ate then for the first time and which you still eat to this very day in memory of those mornings.
Talk about those walks that never happened. About all the times you wanted to go out into the sun, but stayed in the apartment because you were both shining. About how you would try to hide your glow with a blanket, bundled up and left alone together in the primordial darkness. About the burned food you would gulp down with delight, because the touch alone, yes, the touch of your hands alone fixed the taste of all those fucked up meals. About those minutes on the balcony, when you would both go out and look at the passersby in the cold, telling yourselves that you would never be as anonymous, unhappy and straight-laced as them. About the panel block apartments, which were no longer panel blocks. About the carpet and its honey stains that glittered like gold stars. About the television that went blind and mute for good. Yes, talk about the television, because people are so sunk into television that not only can they not see the person next to them, they can’t even see themselves, they have completely lost their ability to see.
Talk about what you found out about her. Talk about her hair, her eyebrows, her nose. About her eyelashes, cheeks, lips, chin, her neck. About her shoulders, those beloved shoulders, which you gazed at as if into a crystal ball, wrongly foretelling the future just because of the sensation of her touch. About her elbows, her thin hands, palms, fingers, nails, breasts. About the vertebrae of her back, which you counted with your index, middle and ring fingers from back to front and front to back towards infinity. About the curves of her sweet ass. About her ribs, navel, hips. About the secret between her legs, about the black hole that led you away to other universes. About the inside of her thighs, her knees, slightly boyish and covered with traces of old scrapes. About her calves, the soles of her feet, talk about everything.
Talk about the conversations, about that personal apocrypha, the only thing you have left. About your plans to go to her villa in the Rhodopes, which you never did see. About how you were going to move there for a few months and curl up in that commune of yours, where you would get clean. About how when you would go to the market in the center of the village, your expression would change, because you would know you were leaving her alone, that you were getting farther away from her. About the sorrow that would be written on your face at the store, and about your happiness at the thought that you’d soon be going back to her. And because of that, because of that whole change, she would be the only one who would know your true face. About how you were only real when you were with her.
About how the two of you had figured out that popping pills wasn’t the way to kick drugs. About the only way, which is to suffer, convulse, groan, sweat and grind your teeth. And your world, in which you were Adam and Eve. About the world, which only Boyan was a part of. He was happy for the two of you, because he saw in you what he himself had lost. About his smile, that other smile, which never crossed his face again after that. About your paradise. About that paradise, where the only thing that darkened your days was the uncertainty. About how you had clung to Zhana. About how you didn’t know how to live without her. About how you didn’t know what would happen tomorrow. About how you didn’t know…

I DIDN’T KNOW THAT SEPARATION WAS STALKING US SO DOGGEDLY. I didn’t know that a former patient from the clinic had been horrified at the morphine treatment program. That he’d taken his story to a private television station. I didn’t know that Mirage’s only goal was to make money by getting us high. G.M., the patient in question, as we later found out, had been taking morphine for more than a year. His fate was a fate shared by many other addicts. He got in touch with the TV station and told them his story, which led to a media investigation. The head of the clinic disappeared. Mirage turned out to be just another lie. A lie about getting clean that drags you further down into addiction and whose only goal is to suck money out of desperate parents who have become exceptionally trusting in their despair. There was a lot of media buzz around the incident, which quickly found its way to courts. Complaints were lodged and the judicial system slowly began digesting the new trial.(…)
Публикувано от ivandimitrofff 1 коментар: 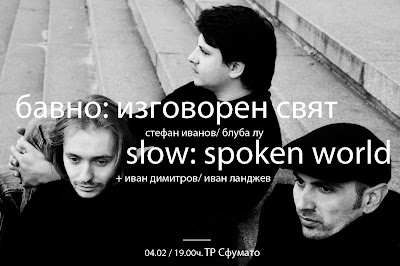